For those of you not in the loop, and I know you’re all just dying to hear…THIS is how Christmas happened at OUR house: Our kids, all but Spawn, were at their other parents’ houses on Christmas morning, so we decided to sleep in, because Spawn doesn’t know any better anyway, and we needed the rest.
I was awakened around 8 a.m. by my SMOKE ALARM going nuts, and Eric shouting from the other end of the house: LOVE!!! GET UP ! GET UP ! Get out of the house! Get out of the house! The house is on fire! Get out! The house is on fire!
I got up, naked, quickly pulled on a nightgown and my boots, and ran up the hall. The living room and kitchen were under a thick cloud of black BLACK smoke, and Eric was out on the porch with Spawn, hopping around foot to foot, hollaring: The house is on fire!
I looked in the kitchen, where I could see there were flames coming out of the oven. I went to the kitchen, filled a glass with water, and threw it in the oven. Pssssshhhhhhhhooosh! Fire out. More smoke. Turned on the vent hood, the air conditioners, and opened the windows.
Problem solved.
Apparently, Eric and Spawn had gotten up earlier. Spawn had thrown a toy in the oven, at some point previously. And then Eric went to put corn dogs in the oven for himself, and didn’t notice the toy laying there below the rack.
The day had nowhere to go, but UP, from there. 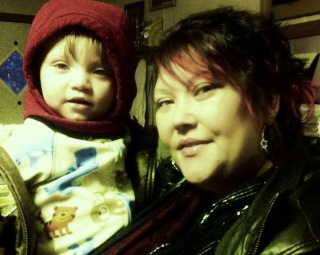 p.s. Don’t YOU do that. I have been informed since this happened that you should use salt to put out kitchen fires, since most kitchen fires are caused by grease, and water would just exacerbate a grease fire.