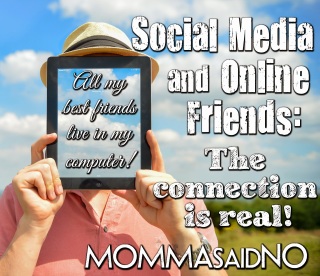 Once upon a time, before FaceBook was even a thing, there was MySpace. There was probably something before that too, but I never knew it. I loved MySpace, and I spent many a non-productive block of hours connecting with people and playing Mafia Wars.

I know many people criticise social media and look down on those who use it frequently, but I’ve truly met some of my best friends online, women with whom I share a bond just as real as if I’d met them in college, or at the grocery store, or in the school drop off line. They’ve been just a click away every time I’ve needed to vent, cry, laugh, or even just when I need to know another adult is available to validate my existence.

MySpace had this thing, called Top 8, where you got to choose people from your friends list whom you wanted to be in your row of connections listed on your profile. (Sort of like the older-than-dirt Friends and Family circle on your phone line–if you’re old enough to remember that!) Being chosen for someone’s Top 8 honor was a pretty big deal. So one day, I was glancing over my husband’s page, and I saw in his Top 8 a picture of THE most adorable little blonde girl with a ponytail. I’d never seen this woman before and I didn’t recognize her name, and I’m thinking to myself, “Who the hell is this bitch in his Top 8 that I’ve never heard of??”

As it turns out, she was an old high school friend of his, and we connected and started chatting. At first it was just a little comment here and there, and then direct message conversations, until one day, we exchanged phone numbers and all hell broke loose.

Now let me be right up front, I hate talking on the phone. HATE. IT. I’ve never been one for phone chatter. So when I say that we spoke on the phone that first time for three hours, that’s like a huge thing. I mean I feel like I should get an Olympic gold medal or something. But we did. We spoke for a little over three hours, about anything and everything and nothing. We discovered, much to our mutual surprise, that we are basically the same person inhabiting different bodies, and we couldn’t wait to put those two bodies in the same room. We made a date, forced our husbands to fall in love with each other as well, and we’ve all been best friends ever since. (Love you Shona!)

I know that not every connection made online (or in person) turns out to be a lasting one. Even given the previous story and his place in it, my husband still likes to tease me about my friends that live in my computer. But I’m willing to wager that for every horror story you hear about online wackos and trolls, there are just as many, if not more, connections that are made that don’t get as much spotlight. Connections that turn into long term relationships that would never have happened if not for social media. I say we shine a light on THOSE for a while, and let our online friends know what an impact they’ve had in our lives. They probably would like to hear that they are as important to you as you are to them.

I say this because a man died today. A kind, witty, compassionate, intelligent man that I met on Facebook five years ago, through a friend of a friend of a friend of a friend on a comment thread of no lasting importance. He was one of a handful of people I met on that same thread that day that I’ve kept in touch with over the years. I don’t know them in real life. I’ve never met them, and probably won’t ever. But I liked interacting with them. I liked reading what they had to say. Their words made an impact on me and in my life, some in a big way, some in smaller ways, but in ways nonetheless. But I never told them so. And now it’s too late to let him know that his absence will leave a hole in the world. We weren’t close, in any kind of way, and we only interacted directly a handful of times, but the world was truly a better place for having him in it, and I am a better person for having known him however slightly. And I wish I had taken a couple seconds somewhere over the last five years to let him know that.

I didn’t mean for this to get maudlin, but tragedy has a way of making one think. When I hear about bad things happening to kids, I want to hold my own children a little tighter. When I hear about an abusive spouse, I’m grateful that my partner is one of the good ones. When one of my friends loses a parent, I want to call my own and tell them I love them. Not that we shouldn’t be doing all this already, but losses in my face always make me more grateful for what I have, and remind me that I need to be more demonstrative of it.

So this is me telling each and every one of you, whether you are in my world by way of physical presence or DSL connection: I appreciate your presence in my crazy life and I’m glad that you have allowed me to be in yours.

Now on a lighter note, this blast from the past I submit only in fun, because I don’t want this memory lost! I just stumbled across my husband’s old MySpace account by accident when I was looking for the C.O.B photo, and this was the only video he’d ever shared. (Thanks for that, Babe.) I won’t embarrass everyone by naming names, but I will say that there was no small amount of alcohol involved in the production of this memory. And I still love that turquoise bra, but I think he wears it much better. (My husband is the one playing the guitar.)