I started going gray around 19 or so. It wasn’t a traumatic thing or anything like that, but when you have hair as dark as mine, it’s not something you can readily hide. When that inevitably happens, you have three choices:
(1) Let it happen.
(2) Dye it.
(3) Pluck the motherfucker.

(If you just heard Sam Elliot’s voice, we are soulmates and should elope immediately.)

The first couple, I plucked. Superstitions be damned, I plucked at least three. And then I decided to start the several decades-long habit of dying my hair. From 1996 to 2007, I faithfully colored my hair once every two months with brunette neutral level 2. In 2007, a funny thing happened. I went in to get some highlights for Halloween, and my stylist talked me into some cherry red streaks. Like a moth to a flame, I was hooked. I fell for that red, and I fell HARD.

From 2008 to 20011, regardless of what style I had my hair cut into (and I had a new one every month, because my bestie was a stylist and I was her guinea pig), I always kept those bright-ass red highlights. And then, it happened. I had to go to court, and our attorney was fairly certain that my wild-ass hair wouldn’t put on the best of appearances. We lifted them out, and just left some white blonde streaks. BOOM. Respectable once again. For about a month, and then I was itching to get some color back in there. This time, though, we went with a hot pinkish fuschia shade that made me weak in the knees. I never loved anything more that seeing that first glimpse of that bright-ass shade in my hair. I kept that until late 2012, when I became obsessed with blue. Blue we went, and blue we stayed, until yesterday–a week before Christmas, 2016.

My husband has been after me for years to let my gray come on out. He has a thing for Emmylou Harris, and he’s said many times that I shouldn’t feel like I have to cover my grays. I get that. But also, I’m not covering my grays because I shun aging or looking old or anything. I cover my grays because I don’t like the way it looks to have just a handful of silver tinsel growing out of my head randomly. If it was in streaks, I’d be all over that! But it’s not, so I cover it. But I’ve been seeing a lot of this lately, and I covet this look fiercely!

And so, yesterday, I began the long and arduous journey into silver hair. I will stop right here and say very clearly: DO NOT TRY THIS AT HOME. If you want this look, get thee to a salon and let a professional handle it. I’m serious. Don’t do it. The chances of a DIY home project like this turning out well are slim to you will absolutely fry your hair off.

But I’m not the sharpest knife in the drawer, and I’ve been self-coloring for decades, so here we go. It’s only hair. If I fry it off, I will wear a wig or rock a pixie until it grows back and be a walking talking warning to everyone else 😀

Let me insert some of my favorite selfies here, so you can see the look I started with:

(Also, if you ever see me with anything other than kinky waves, please know and appreciate that I spent hours with a smoothing brush and a flat iron to make it happen, because the natural state of my hair is kink.)

Okay! Now that we’re clear on our starting point, let’s get this party started! First, I slathered my hair in coconut oil, covered it with a shower cap, and slept in that overnight. And then I got up and washed my hair. (No conditioner, just shampooing the oil out.) Then I towel dried and sectioned my hair to start the bleaching process. 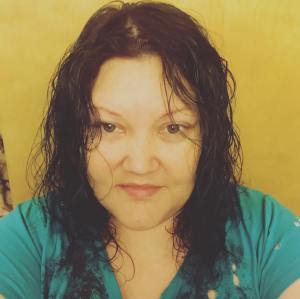 I used 40 volume lifting bleach, and I left it on there about 40 minutes total. I did start about 3inches down from the root first, and then did my roots last. So it was on the new growth maybe 20 minutes. (Virgin hair bleaches faster, so never start at the root when bleaching your whole head!)

So, for the first lifting, we did make it to a bright-ass YELLOW! Which, if you have dark hair, you know is pretty great for one take, because we usually get a rank orange nastiness LOL So this was a great first run. The next step is to tone the fuck out of it and moisturize, moisturize, moisturize! In a few days, I will do a second bleaching and see where we are.

I did manage to get some makeup on my face the next day, but I will also most likely be wearing a wig or a hat if I need to leave the house in the next two days. I will go ahead and post this so you can laugh at my dumbassery, and will update this post as changes happen!